About twenty seven years ago, a group of local businessmen had a meeting one afternoon on the front porch of Dr. Osborne’s house in Champaign. This group, as I recall, consisted of Mal Hickman, who was at that time Secretary of the Association of Commerce in Urbana; Jim O’Neil, a prominent insurance man of Champaign; and myself. We were disturbed about the death toll on the highways during the Fourth of July weekend, and during that time period. I mentioned that I had visited many cities in the course of my operations, and had noticed that a parade and fireworks really held the townspeople and it kept them off the highways.

Nothing more was said at that time but apparently Jim O’Neil, who was connected with the Chamber of Commerce in Champaign, thought enough of the idea to broach the subject to the Chamber of Commerce. About a month later, I received a phone call, asking me if I would consent to join the committee and take over the pyrotechnics of the operation. I said yes and we had many meetings. We had no money, however, and decided to each take a department, check, and get a cost for that department. We came up withy a total figure of around $8,500. But we still had no money, and the big question was how to get it.

Now here is where the man who really put this program over and has not received full credit for it entered the picture. His name is Phil Hundley of the News Gazette. He was the editor of the News Gazette, and not only controlled that newspaper but the radio station as well. He advertised the program in the newspaper and over the radio, and donations began to come in. The idea was taking hold, but we still did not have enough money.

Phil came up with the idea of having a porch light parade. We sectioned off the twin cities, Champaign and Urbana, and asked for volunteers to make the collections. Anyone who wished to donate would just put his or her porch lights on a certain night, and a car, truck or even a “duck” would pull up to their house and take the donation. Meanwhile, one of the mainstays of the entire project, Lyle Blue, was standing by taking notes and counting the money. He relayed the sum to Larry Stewart, who was the broadcaster of the radio station, and who did a yeoman job in keeping the townspeople aware of how the donations were coming in. He had announced that evening, if we made our goal, I would have Joe Porcheddu set off an aerial display at the radio station. Of course, in those days the radio station was out in the country south of town, and there were no houses around.

Joe came over with the aerial display, set up the mortars, and finally (I think it was around 11 o’clock that night) Larry Stewart announced that we had met our goal. I gave the word to Joe, and he set off the display. We were not entirely sure how this whole thing was going over, but Joe had set up a 24-inch panoramic bomb; and in the light of it, we saw that every farm road was lined bumper to bumper on both sides with people waiting to see the display. This gave us a clue, and we got a lot of heart from that, and went to work. From this humble beginning, the idea has mushroomed into the celebration you see today.

I would like to mention a few of the people who were invaluable in helping us ,such as Joe Blaze, who was head of security at the University of Illinois; Paul Cruikshank, who was instrumental in getting us the stadium after the first disaster of too long a parade and too small a place to seat people, the County Fairgrounds; Wallace Ewing; and many others. After so many years, it is hard for me to recall all of the names, but credit should be given to Clara Hodges, who took notes, on every meeting we had; Squeaky Ingleman, Alan Carter, and many other men and women. Credit for the revival of the Spirit of ’76 in the parade should go to your own Board member, Ron Smith, who brought it back after it had been dropped for several years, and who can recall the fried chicken and ice cold pop and the bar in the back of the Lincoln under the stands.

In closing, may I say it has been a very rewarding experience for me, and my wish is that this celebration will never end.

By Ronald J. Smith, Board of Directors

The Fourth of July Freedom Celebration, Inc. had the responsibility of “sponsoring, promoting and directing a community-wide observance and celebration of the anniversary of the Declaration Of Independence in a manner that emphasizes the basic ideals and principles upon which the United States was founded. The observance to be non-commercial in nature without benefit to any individual.”

The officers of this celebration began meeting in November of 1975 to elect new officers and assign committees. They continued until July 4, 1976.

July 4, 1976, was a bright, clear and sunny day. Our parade began at 1:05 P.M. and the route was as follows: start at Coler and Green in Urbana, proceed West to First Street in Champaign, then proceed South on First to a point near Peabody Drive. The route was two miles long, as it has been for several years.

The parade included 170 units, consisting of floats, marching bands, clowns and many other groups, to bring enjoyment to those in attendance. Young and old alike came to view the parade and it was estimated that 75,000 to 100,000 people lined the route. The theme for the parade was “Sprit of ’76”

In the evening, an estimated 45,000 people went to the Stadium to enjoy a varied program of entertainment which concluded with the traditional fireworks.

It is hoped that the above notes will be of interest to those of the future and give them an insight to the greatest Fourth of July celebration ever.

* Active Board or Committee Member

Our event is supported entirely by donations from local businesses and members of the community like you.
Make a Donation

Want to volunteer? Make a donation? Get more information about this year’s events? We’re here to answer your questions.
Send Us an Email 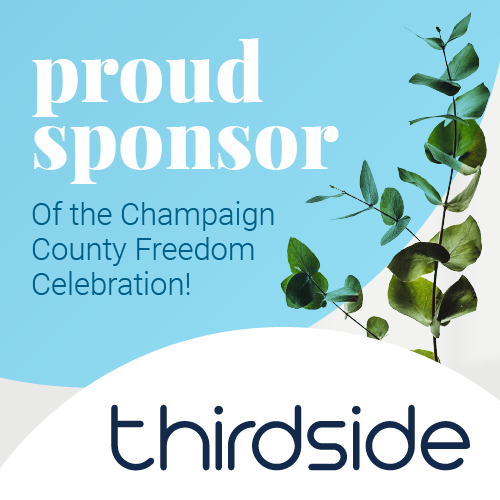